The Do's and Don'ts of Wet Application

In fact, this method is not recommended for all applications, such as when applying air-egress vinyls, reflective or metalized films on unpainted metals, or fleet graphics over rivets, which is explained below in further detail, “When Not to Use Application Fluid.” 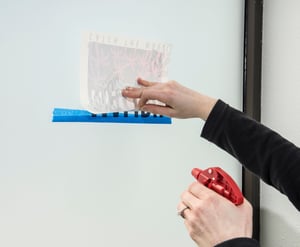 The Right Way to do a Wet Application – Step-by-Step:

1. Clean the substrate by wiping it with a rag saturated with solvent, Isopropyl alcohol mixed with water. Then dry the surface with a lint-free paper towel before the solvent dries.
2. If the graphics release with difficulty from the release liner, rub the back of the liner against a sharp edge of your workbench. This step helps break the bond between the graphic and the release liner.
3. Turn the masked graphic upside down and peel the liner from the back of the graphics, rather than trying to pick the graphics up off of the liner.
4. Lightly mist the substrate with application fluid. Use the least amount of fluid to accomplish the application process. Usually, also spraying the adhesive side of the graphics with application fluid is unnecessary, unless applying large panels. Spraying cut vinyl letters with fluid can also cause the lettering to loosen up on the application tape or cause the lettering to fall off.
5. When squeegeeing the graphics, use good pressure to force all of the fluid from under the vinyl film. Start in the center of the graphic and squeegee outward to force out the fluid from underneath the graphics. Remember, you're applying a pressure-sensitive film. It's called "pressure-sensitive" for a reason, so apply some pressure.
6. If the application tape releases with difficulty from the graphics, lightly spray the top of the paper tape with fluid allowing about 30 seconds for it to soak in.
7. In removing the application tape, peel the tape 180º against itself. After removing the application tape, mop up the residue with a paper towel.
8. After removing the application tape, re-squeegee the entire graphic with a squeegee covered with a low-friction sleeve. The low-friction sleeve protects bare vinyl from scratches caused by a hard squeegee. This step is essential in preventing edge lifting.
9.Complete the job by post heating the entire graphic with an electric heat gun. Post heating ensures good adhesion and will cause surfaces scratches on the vinyl to disappear.

In performing wet applications, some application tape adhesive systems can leave a milky residue on the surface of the applied graphics. In most cases, you can clean off this residue from the vinyl film with something like Rapidtac’s RapidPrep cleaner.

When NOT to use Application Fluid: