Roll Slitting Tricks of the Trade 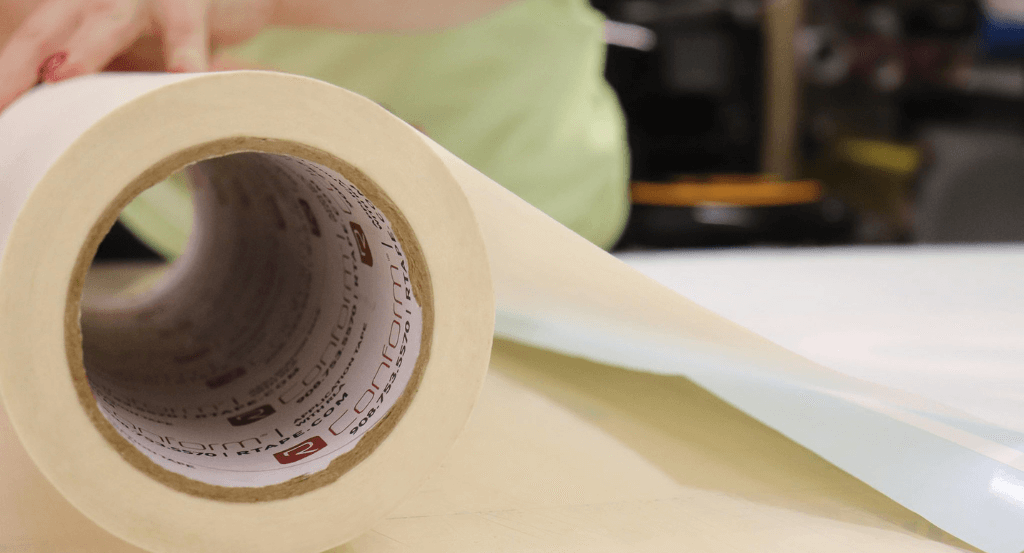 When it comes to application tapes and roll slitting equipment, there are many idiosyncrasies and tips of the trade.

RTape by Nekoosa has mastered many tricks over the years to supply our customers with the highest quality application tape rolls, including razor-slitting factory-cut rolls, using proper blade techniques, cutting speeds and more. Let's take a look into what makes these methods so superior and how to execute them.

Why is razor-slitting factory-cut rolls of application tape the superior method?

There are many advantages of razor-slitting “factory cut” rolls of application tape. The paper application tapes are slit on the coater as the paper comes out of the curing oven before the tape is wound onto a core. The edges of the rolls are cleanly cut. In slitting film tapes and self-wound overlaminates, Nekoosa also utilizes sophisticated industrial machinery that unwinds, slits and rewinds the rolls of tape. This heavy-duty machinery is ideal for producing rolls without imperfections. Overall, razor-cut rolls of application paper feature cleanly-cut edges, easier unwinding and are less prone to tearing.

Many other manufacturers as well as some distributors, utilize lever-type slitters, which are commonly referred to in the sign and screen print industries as “baloney slitters”. While cutting rolls of tape with acceptable edges is possible using this lever-type of equipment, often “baloney” cut material exhibits imperfections that give sign makers fits.

A common problem with “baloney” cut application tape is a nick in the paper, caused by a blade, that isn’t sharp or that has nicks. Rolls with nicked edges frequently tear. Another problem is a roll with a dented or crushed edge. Dented edges frequently result, because one side of the cutting blade has a beveled edge, which tends to slightly crush the edge of the roll. A third problem is gapping between the layers of the tape. Gapping often results when the operator exerts too much pressure in the cutting operation. Excessive force compresses and crushes the roll, causing gaps between the plies. This exposes the adhesive on the application tape to air, allowing it to dry out and, consequently, lose tack. Finally, in using the lever-type of equipment, glue balls often form on the edge of the roll, because the heat generated from the friction of the blade melts the latex adhesive and fuses it together. Nicks in the paper, crushed edges and glue balls can cause the application tape to snag and tear as it is unwound.

When the application tape tears, it often falls onto and ruins the vinyl lettering.

What are the negative results of baloney cutting rolls?

Baloney cutting rolls can result in crushed edges, gapping, nicks in the paper and glue balls. While the case in favor of “factory cut” rolls is very strong, we realize that many distributors have chosen to slit their application tape. To help, we’ve compiled a few tips. At first glance, the operation of a “baloney” slitter seems relatively uncomplicated. But, as with many things in life, it always looks a lot easier than it really is. In fact, mastering the roll slitting operation involves learning the idiosyncrasies of the equipment along with a few tricks of the trade. Cutting some material can also require modifications in blade type and cutting procedures. For example, cutting polypropylene tape can be more demanding than slitting paper tapes or polyethylene films.

What is the slitting blade and why is it important?

Having the proper blade and keeping it sharp, may not be all that you need for great roll slitting, but it certainly helps in getting the job done right. Always use a sharp blade, when cutting either paper application tape or application film. Regular sharpening should be part of any preventative maintenance schedule. Dull blades can crush the edges of paper tapes, as well as distort or shatter a film face stock. Believe it or not, a blade can be too sharp. (This usually isn’t something to worry about when slitting rolls of application paper. Instead, it can be a problem when cutting rolls of film.) An over-sharpened blade can produce what is called “angel hair” (fine strings of the film) when slitting a film. An overly sharp blade can also result in a concave cut. Additionally, overly sharp blades can even cause the adhesive to smear on the cut edge of the roll. Smeared adhesive causes the tape to stick together, resulting in difficulty unwinding. In contrast, a dull blade frequently causes a convex edge. As a regular practice, you should check the evenness of your slit rolls, by placing a straight edge across the roll’s edge and visually inspecting the cut.

How do you select the right blade for cutting rolls of application tapes?

Cutting paper application tapes requires a blade that is flat on one side and beveled on the opposite side. The beveled side is ground to a 45º angle. Remember that the side of the blade with the bevel will slightly crush the edge of the application paper. With a single-bevel blade, it is possible to cut application film between two and six inches wide. Single bevel blades can also be used to trim the edges of a roll of film. In cutting rolls of film, between six and 24 inches wide, however, a double bevel blade must be used. The double bevel blade acts as a wedge that pries the roll apart. In cutting application film, friction generates heat between the side of the blade and the edge of the film. The extreme heat generated in the process can not only melt and fuse the adhesive, but it can also embrittle the tape to the extent that the film can fracture as the roll is unwound.

To stabilize a blade during the cutting process, you can mount a six-inch plate to the outside of the blade. The purpose of the plate is to minimize blade vibration. By doing this, the blade makes a smoother, more even cut. The plate also serves a secondary function of kicking out the off-cut end of the tape away from the roll and along the shaft.

Hard plastic films, such as polypropylenes, may require thinner blades made of extremely hard steel. Although double bevel blades were primarily designed for cutting film, they are also great for slitting narrow widths of paper tapes (2” and smaller). This type of knife produces a straighter cut.

Lever-type or “baloney” slitters are inexpensive pieces of equipment that do an acceptable job for many applications. This equipment, however, has its share of limitations. Whether an operator cuts paper or film tapes, the maximum length of roll that can be cut is approximately 300 feet.

Why does using a cooled blade result in great results?

Although application papers and films can be successfully cut with or without a fluid-cooled blade, a cool blade usually produces better results. An uncooled blade results in the latex adhesive melting and producing “glueballs”.

Slitting without a coolant can be accomplished, but it requires a sharp blade and the right cutting technique. In cutting either paper or film application tapes, use the lightest pressure to accomplish the task. The weight of the operator’s hand is usually all the pressure that is required. As many say, “you don’t need to muscle the tool. Let the tool perform the task that it was designed to do.” Some operators mistakenly try to speed up cutting by pulling excessively on the blade handle. Excessive pressure crushes the edges of the application; it can cause gapping and can cause the blade to overheat.

Cooling the blade with fluid usually results in smoothly cut edges with no glue balls. Slitters can usually be retrofitted with a misting system for less than $1000. The best cooling systems utilize two nozzles, spraying both sides of the blade. The nozzles should be directed at the tip of the blade. Typically, the recommended air pressure is 40 lbs. The amount of misting solution is regulated by a volume control knob. In operating the system, always monitor the level of the fluid in the tank. Running the tank dry requires the pump to be primed. Commercial mist cooling fluids should be used for cutting operations.

Some precautions should be taken if fluid is used to cool the blade. Use the least amount of fluid to cool the blade for the best results. Cutting film requires much less fluid than cutting application paper. Excessive fluid can potentially deaden and contaminate the adhesive. Solutions of water and alcohol may soften the adhesive, discoloring it and turning it a pasty white. This typically isn’t a problem. If the tape is dried adequately, the discoloration usually disappears. After slitting rolls of tape, dry them by placing them on vertical rods or a corrugated board. The corrugated board allows the moisture to wick away from the edge of the tape.

How do you select the proper cutting speed?

Selecting the proper cutting speed is a matter of trial and error, experience and sometimes a little luck. Longer rolls require a slower cutting speed. Tighter rolls and harder face stocks should also be cut more slowly. One rule of thumb is to start at a slower speed, such as 100 rpm, and then increase the speed as required. As a word of caution, don’t cut so slowly that you produce inferior cuts. (NOTE: Different brands of slitters have different features. Not all slitters have variable speed control. Some operate at one speed only.)

In cutting application paper, both the chuck and the blade should be engaged. Chuck speeds for some slitters are typically 400-450 rpm, with the blade speeds set at 200-215 rpm. (NOTE: The blades on some types of slitters are free-wheeling.) Different materials may cut better at different chuck and blade speeds. Often, in cutting some hard films, better results are achieved by disengaging the blade and allowing it to rotate freely. (NOTE: With some slitting equipment, the blade may not disengage completely.) Running the blade while cutting hard films, such as polypropylene, will cause excessive friction. This friction causes the blade to heat up, which can cause the adhesive to melt and ball up. Some operators will lubricate the blade with a silicone spray to reduce friction and heating.

In cutting hard films, some operators will run their equipment at a slower speed, such as 250-275 rpm. As the blade cuts through the film, it will gradually increase the chuck speed to as high as 380 rpm. This slow acceleration generally produces a smoother cut. Keep in mind that as you begin to cut into a log of application tape, the surface speed at the outside of the roll is much greater than it is at the core. That’s because the outside of the log travels a greater distance per shaft revolution than it does closer to the shaft. As the blade cuts more deeply through the tape, the surface speed gradually decreases. Increasing the chuck or mandrel speed compensates for the change in surface speed in the cutting process.

For more tips and tricks about Nekoosa's RTape application tapes and premasks, reach out to a Nekoosa Business Development Manager through our website.