The Problems: Some types of films are difficult to work with. Here are some of the problems that sign makers have encountered in the past. In one case, a designer wanted to use a carbon fiber wrap film for cut vinyl lettering. We know this is not the typical application for these wrap films that the manufacturer intended. But designers will come up with all types of unusual applications for products. The application tape typically used would not sufficiently adhere to the texture of the film's surface to transfer the lettering.

From time to time, we also get calls from sign makers who have difficulty transferring the highly textured window graphic films, such as 3M™ Dusted Crystal. Wet applications on glass can compound these problems. Applying lettering cut from matte finish wall graphic films, such as Oracal™ 631, can also be challenging. Either the graphics won't transfer from the liner or the application tape won't release from the applied graphics.

Transferring thermal die cuts is another application requiring a special application tape. Here's what causes all the problems. Thermal die cutting works by heat and pressure. The heat melts the film along the cut lines. This creates a noticeable lip on the edge of the vinyl, which is referred to as a burled edge. The pressure of the die against the release liner will usually break through the siliconization layer, exposing the fibers of the liner's paper base. Over time the adhesive of the vinyl flows into the cutline, bonding with the paper fibers.

The Solution: There is a solution for these problem graphics. For these applications many sign makers use our AT75.1 Clear Choice® product. AT75.1 is an embossed clear film application tape that looks a lot like medical tape. The higher tack adhesive coated on the film transfers problematic films and makes these tough applications easier. 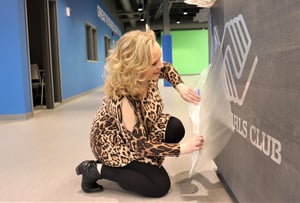 Success in using this tape depends on two factors; time and temperature. In laminating the tape to the graphic be sure to apply good pressure. Remember, the adhesive is called "pressure sensitive" for a reason. You must use pressure so the adhesive will adequately flow out over the surface of the vinyl.

Because the adhesive is embossed, it initially only makes contact at the high points of the adhesives' surface. While the adhesive is high tack, it will take time for the adhesive to flow out. As it flows out, increase the surface area that makes contact with the substrate. Time also helps. Here's a tip from Tom Zambito, who runs the wholesale graphics shop of Earl Mich Company. Tom regularly produces thermal die cut decals from sign shops. After applying AT75.1 to the die cuts, he waits for at least a half of an hour before attempting to transfer the die cuts. This gives the adhesive time to build to the graphics. This tip also is handy when working with other graphics that are difficult to transfer.

Temperature is always a factor affecting adhesive flow out. When ambient temperatures in a shop are colder, the adhesive is stiffer and does not flow out so readily.

The Applications: The unique performance characteristics and features of AT75.1 make it a great tape to have on hand for those problematic applications. Here are some of the applications for which the tape is particularly well suited:

Other Features: The deeply embossed surface of AT75.1 impresses a grid pattern of air-egress tunnels in the adhesive. This air-egress feature makes lamination of the tape to vinyl films bubble-free. That's a big deal because if you entrap air bubbles between the application tape and the film, you are almost guaranteed to get bubbles in your applied graphics. The deeply embossed surface also allows the user to tear AT75.1 by hand, in a straight line, for easy dispensing in the shop.

At the job site, the film's easy-to-handle characteristics make graphics applications easier, faster and remarkably trouble free. If the adhesive side of the film accidentally folds onto itself, AT75.1 pulls apart easily without adhesive delamination. Good clarity also helps alignment of multiple colors. After the graphics are installed, the application film removes easily. This feature is critical when applying wall graphics or performing wet applications on windows. Other high tack film application tapes that don't release easily often pull the applied graphics from the substrate.

Test, Don't Guess: If you are having problems transferring graphics, our advice is to put AT75.1 to the test. You can order a sample of this product, or any other RTape product, from a stocking distributor or by contacting us directly (samples@nekoosa.com). Please click here to request a sample now. We will make every effort to find a product solution that satisfies the particular requirements of your job.